No products in the cart.

Time to flex your BBQ muscles! 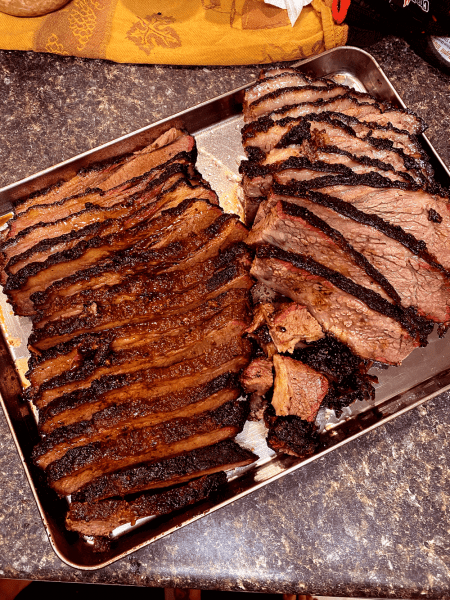 There is no single “right way” to cook a brisket and even among the professional BBQ circuit there is quite a bit of variation in method and technique. We don’t claim to possess the holy grail recipe for brisket, but we do have a tried and true recipe that is founded in the fundamentals that everyone generally agrees upon. Below we will lay out the basics of what you need to know to have success on your first try and then you can read the provided links to dive further down the rabbit hole of everything there is to know about brisket!


The main things you need to know are:

A whole brisket consists of the Flat and Point muscles. The point sits over the flat and is only about 3/4 as long as the flat so a full roast will be very thick on one side and taper significantly towards the other end. Cooking a whole brisket is the traditional way, but you can cook just the flat or the point if you want to, but they must be raw. Cooking a corned beef roast in this manner will not come out the same, but if you have a corned beef roast in a bag then you can easily make Pastrami! See that recipe HERE

The Point Cut is always less expensive, is smaller in size, and tends to be fattier. Even though people often avoid fattier meats, the fat in the point cut largely melts down the way chuck roast does in a stew or for a traditional pot roast. This is the good fat that makes meat juicy and if you are going to make burnt ends they are usually cut from the point.

The Flat Cut is very uniform in size, larger, and leaner. The Flat makes better presentation as you can get nice slices from this cut, can display it on a roasting dish as well as get nice long strands if you decide to shred it. However, it can be a little dry sometimes as it doesn’t have much fat.

In general, with brisket, the meat is too dense for the fat cap to effectively get absorbed when it melts if you place the fat cap up. It surely does not hurt, but it doesn’t melt in the same way other cuts of meat do. The fat cap should be placed down if you have a high heat underneath instead of an even heat all around. In this way, the fat helps buffer the meat from burning on the bottom where you can’t see it until it is too late. If you have a regulated pellet smoker then I put the fat cap up and the point away from the updraft.

I prefer to cook brisket on a rack over a tray or pan for ease of handling and so I don’t lose too much rub to the fire. Also, keeping some water or beef broth underneath helps in many ways. First, it will steam and keep a moist heat in your smoker which helps the meat to absorb the smoke better. Second, any juices that drip off are caught and don’t burn which provides a nice source of flavor for jus or sauce later on.


Smoking brisket on a Traeger

Get Your Brisket Rub For This Recipe! 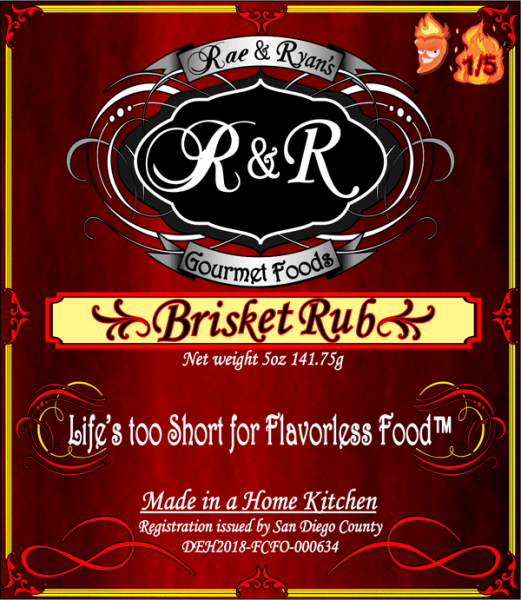 Hey, relax and take a minute to get to know us a little.

Nice of you to make it to the bottom of the page, take a minute and put your feet up. We would love to hear from you if you have any questions about our products, procedures and manufacturing,  or allergens etc..  Sometimes just an ol’ fashioned “Hello” is nice too 🙂

While we’re chattin’, you should know that we hand out a lot of coupons and discount codes for people who come here often, buy a thing or two and most importantly, sign up for the mailing list over yonder —>. We can’t send you anything if we don’t know where you are, right?

Looking for a page?

We are looking to add people to our R&D community, which is called the “Flavor Squad”, to gain valuable feedback about new products nearing release. If you’re interested in receiving samples of new product for only the low low price of FREE, plus FREE shipping, then sign up for our mailing list! If you drop us a line in the contact form on the right here and tell us a little something about yourself then you’ll move to the top of the list. If you let us know when your birthday is then we will send you a coupon!

All we ask is that you fill out a very short 10 question online survey to tell us your honest opinion.

Don’t worry about hurting our feelings and don’t hold any punches; we need the unapologetic version of your opinion on what we sent you. Like it, love it, or leave it? We need to know!

Click below to see all of our  promotions and current email flyer.

Drop us a line! Free Shipping on orders over $40 with coupon code! See the bottom of any page for our current sales and promotions! Site best viewed in landscape on Mobile Devices. Dismiss